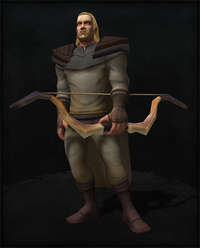 Characteristics include: Races and equipment.

As Arcfall is a skill based system, where every action you do increases your skills, you can create any type of class. Be it a specific class where all your skills are built towards one objective or a hybrid class where you mix in certain skills, each player will be unique. Some players can specialize in crafting while others can be healers or warriors.

Crafting is very easy to get into. You can either purchase or find a recipe of an item you wish to craft and then by placing it in a specific crafting station, with the materials it requires, you can craft the item. You will, however, need to be at a certain skill level to use certain stations and recipes. With many different biomes to explore in the world, you can find and harvest many different resources. If you do not need them to craft, then sell them to other players on the open market.

Combat is intuitive and takes you back to the old school games, where combining different abilities can have different outcomes. With certain areas being full PvP combined with a full loot drop system, combat is very competitive. Make sure to get back to your body after your spirit is released within three minutes or someone else will be able to loot it!